Laine Hardy was destined for a life in music. It was always in the ether growing up in the musically sacred state of Louisiana. The official soundtrack for family road trips along the state’s Highway 63 was a steady stream of Elvis Presley, classic rock and blues. Live, regional swamp pop, a combination of country and New Orleans-style R&B, was inescapable at several local restaurants the family frequented.Childhood in his hometown of Livingston, La. was getting lost in the woods around his family’s property either racing extended family barefooted or riding ATVs. The bottoms of his feet would always have calluses from traversing the native limestone. Hunting, fishing or frogging along the bayous near Lake Maurepas was a way of life and shaped his deep appreciation of nature and solitude.As a member of a generation of musicians who grew up teaching themselves how to play music through YouTube, Hardy spent his spare time in his formative years researching his idol, Presley, and the way he captivated a crowd. Guitar lessons at Jody’s Music, the local music shop, helped him master his instrument. By the time he turned eight years old, his mother, Cindy Hardy, had bought him his first guitar from Wal-Mart. By the age of 14, he was playing in The Band Hardy, the family group that featured his older brother Kyle Hardy on lead vocals.Prior to winning the 17thseason ofAmerican Idolin 2019, Laine cut his teeth winning over an audience performing with The Band Hardy, who would perform for whoever would hire them. “We played birthday parties, bars, restaurants, fairs and festivals,” Hardy recalls. “We played from 9 p.m. to 1 a.m. and sometimes longer if they wanted us to keep playing. But when we first started, my brother sang most of the set, and I would play guitar in the background and do solos.”

September 22, 2020 – Nashville, TN — Rising country star and ABC’s American Idol winner, Laine Hardy, is set for a September 28th live stream concert benefiting American Red Cross Disaster Relief. The event kicks off at 6:30 p.m. CT with music starting at 7:30 p.m. CT. Following the devastating damage that Hurricane Laura brought to the Livingston, Louisiana native’s home state last month and the recent landfall of Hurricane Sally along the Gulf Coast, Laine felt a strong calling to give back in some way.  The show, which is free and open to the public, will encourage fans to help people affected by disasters like storms, wildfires and countless other crises by making a gift to American Red Cross Disaster Relief at redcross.org/lainehardy. The gifts enable the Red Cross to prepare for, respond to and help people recover from disasters big and small. For more information on how to help and to tune in on September 28th visit HERE.

“Hurricane Laura hit west of my hometown and me and my family stayed safe and did not have any damage. So many others here in Louisiana cannot say the same,” says Laine.  “And last week the Gulf Coast was hit by Hurricane Sally, these are really tough times for so many and I’m honored to work with American Red Cross to help out any way I can.”

The event is already off to a great start, with a generous individual donor offering a 1:1 matching gift up to $10,000 in support of disaster relief work across the country.  Visit HERE on September 28 starting at 6:30 p.m. CT to watch Laine perform his latest song, “Tiny Town,” recent hits “Ground I Grew Up On,” “Let There Be Country,” and more!

Laine Hardy was six when he picked up his first guitar and later joined his brother playing at local clubs and bars for upwards of six hours a night, inspired by artists ranging from Morgan Wallen to Luke Combs and Elvis Presley to Mark Broussard.  After winning American Idol in 2019, Laine focused on songwriting and touring, headlining shows in Denver, Indianapolis, Sacramento, Minneapolis, Lexington and more.  His 2020 “Ground I Grew Up On” virtual tour garnered over 2 million views in April and May.

While Louisiana is home, Nashville is where he was destined to be.  There he met producer Michael Knox (Jason Aldean, Thomas Rhett) and the pair went to work on several new sides releasing in 2020.  His latest, “Tiny Town” (Michael Tyler) was released on July 10, and tracks “Ground I Grew Up On” (Brandon Kinney, Josh Thompson, Brett Beavers) and “Let There Be Country” (Jason Afable, Steve Moakler, Tim Nichols) were released April 10 on Buena Vista Records/Industrial Media’s 19 Recordings – tell the stories of Laine’s childhood on the bayou where on an average day you would find him fishing, riding his four-wheeler, spending time with his family and dogs, and feasting on jambalaya or his Korean grandmother’s homemade kimichi.  For more information about Laine Hardy, visit LaineHardyMusic.com and join his journey @TheLaineHardy Instagram/Twitter/YouTube/Facebook/Official Web Site.

About American Red Cross: The American Red Cross shelters, feeds and provides emotional support to victims of disasters; supplies about 40 percent of the nation’s blood; teaches skills that save lives; provides international humanitarian aid; and supports military members and their families. The Red Cross is a not-for-profit organization that depends on volunteers and the generosity of the American public to perform its mission. For more information, please visit redcross.org or cruzrojaamericana.org, or visit us on Twitter at @RedCross. 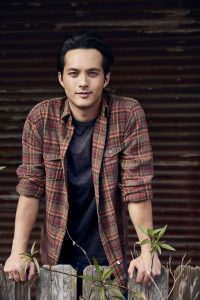 Nashville, TN – July 10, 2020 – Rising country music star Laine Hardy released his brand-new song “Tiny Town” today, July 10.  Both a studio version and a stripped-down acoustic track are available at https://smarturl.it/LHTinyTown.  The “Tiny Town” acoustic music video is set to go live on July 17.  Written by Michael Tyler and produced by Michael Knox (Jason Aldean, Thomas Rhett), the down-to-earth lyric rings with humble honesty coming from the Livingston, Louisiana (pop. 2,000) native.
YEAH THAT’S LIVING, LIVING IN A TINY TOWN
9 TO 5 AND FRIDAY NIGHTS WEARING MAIN STREET DOWN
YEAH JUST LIVING, LIVING IN A TINY TOWN
HARDWOOD FLOORS AND LIQUOR STORES LETTERS BURNING OUT
WHAT I WOULDN’T GIVE RIGHT ABOUT NOW
ONE OF THESE DAY I’LL ROLL ON OUT
HOME TO MY TINY TOWN

The new music is a welcome bit of good news, as the singer announced a Covid-19 diagnosis last month.  The 19-year old is thankful for what has been a mild case and successful recovery.

“What a crazy summer.  I am lucky to be feeling better and want everyone to stay safe and healthy out there.  It is more important now than ever for younger people to step up,” says Laine.  “Thanks for all the well wishes from my own hometown community and beyond.  I’m grateful to still be able to get music out over the summer and hope you guys enjoy ‘Tiny Town.’”

Laine plans to continue his virtual tour with a second leg this summer. Tickets and information for last season’s winner of ABC’s American Idol upcoming digital dates are available now at https://lainehardy.bubbleup.live/.

The virtual performances follow a highly successful online tour, garnering over 2 million views spanning April and May around the launch of two brand-new songs. Music Row proclaims “(Laine) brims with sincerity on this love letter to his hometown” on “Ground I Grew Up On,”  while “feel-good anthem” (Sounds Like Nashville) “Let There Be Country” dials up the fun. Both tracks, a definitive nod to Laine’s deep Louisiana roots, are now available on all streaming platforms via Hollywood Records/Industrial Media’s 19 Recordings.  Newly released acoustic versions of the tracks, also produced by Michael Knox along with brand new videos, are available now at https://smarturl.it/GIGUOAcoustic/Vevo.

Fans can catch the day-in-the-life official music video for “Ground I Grew Up On,” which has racked up over a million views and counting, filmed earlier this year on the picturesque bayou in his home state at https://youtube.com/lainehardy.  In addition to the virtual tour dates, fans can visit Laine’s newly launched online store for a limited selection of T-shirts HERE.

About Laine Hardy:
A native of Livingston, Louisiana (pop. 2,000) Laine Hardy was six when he picked up his first guitar and later joined his brother playing in local clubs and bars for upwards of six hours a night, inspired by artists ranging from Morgan Wallen to Luke Combs and Elvis Presley to Mark Broussard. After winning American Idol in 2019, Laine focused on songwriting and touring, headlining shows in Denver, Indianapolis, Sacramento, Lexington, Minneapolis and more.  While Louisiana is home, Nashville is where he is destined to be. There he met producer Michael Knox (Jason Aldean, Thomas Rhett) and the pair went to work on several new sides releasing in 2020.  “Ground I Grew Up On” (Brandon Kinney, Josh Thompson, Brett Beavers) and “Let There Be Country” (Jason Afable, Steve Moakler, Tim Nichols) — released April 10 on Hollywood Records/Industrial Media’s 19 Recordings — tell the stories of Laine’s childhood on the bayou where on an average day you’ll find him fishing, riding his four wheeler, spending time with his family, dogs, and feasting on jambalaya or his Korean grandmother’s homemade kimchi. For more information about Laine Hardy, visit LaineHardyMusic.com and join his journey @TheLaineHardy.
Laine Hardy
Instagram / Twitter / YouTube / Facebook / Official Website

About Industrial Media’s 19 Entertainment
Industrial Media is an independent production group launched with the acquisition of The Intellectual Property Company (IPC) by the reorganized companies of CORE Media Group. Through its work with well-established industry leaders, including ownership interests in Sharp Entertainment, IPC, and B17 Entertainment, and partnerships with Fairhaven Films, Momentum Content, and Radicle Act, the Company creates and produces multi-platform programming of various genres for audiences worldwide. Industrial Media companies currently produce over 50 series across 35 networks annually. Key programs include the global hit “American Idol” co-produced by 19 Entertainment for ABC and “So You Think You Can Dance” co-produced by 19 Entertainment for Fox, Sharp Entertainment’s “90 Day Fiancé” franchise for TLC and The Intellectual Property Corporation’s Emmy®-winning hit documentary series “Leah Remini: Scientology & the Aftermath” for A&E. Additionally, Industrial Media’s 19 Recordings has launched the music careers of platinum artists including Kelly Clarkson, Carrie Underwood, Daughtry, Phillip Phillips, Lauren Alaina; and more recently, “American Idol” winners Maddie Poppe and Laine Hardy along with prior contestants such as scarypoolparty and Laci Kaye Booth. Industrial Media is backed by the private equity firm Crestview Partners, BlackRock Asset Management, and the United Talent Agency. For more details, visit www.industrial-media.com.
###